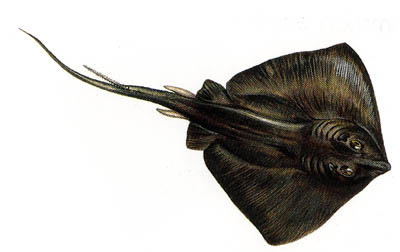 Late one afternoon around 4:00PM or so, I was running the Oyster Lake shoreline, right behind the San Luis Pass area. I was running parallel to the shoreline looking for some kind of sign of fish activity. I was about 150 to 200 yards from the ICW when I saw a small slick pop up and I idled in for a closer look. After checking things out, I eased the anchor over the side, having decided to make an evening session out of it. Within a few minutes I was in the water chunking a big topwater.

As I shuffled my feet toward the slick, steadily working my surface plug and looking for that first explosion of the afternoon, I noticed a sand streak shoot out in front of my feet. "No worries" I thought to myself as I kept chunking away, working towards the slicks popping up towards the shoreline. I shuffled a few more feet and another sand streak shot out across the bay floor. "Man" I thought to myself, "those flounder must be thick in here!" I kept plugging away.

Then, out of the corner of my eye, I saw it! A light, grayish-brown silhouette lying motionless on the bay floor. This was no Flounder! This was the OTHER flat fish of the sea! The one that thousands of fisherman up and down the Gulf Coast fear the most! This is the flat fish, which with one swipe of its tail, can put you out of commission for weeks or even months.
I saw seven stingrays and four more unconfirmed sand streaks that afternoon. To be truthful, I spent more time worrying about what might be lying on the floor of the bay than on the fish that were feeding right in front of me. To say the least, fear of injury from a stingray barb had wrecked my concentration! Each year, there are an estimated 5,000 stingray attacks in the United States alone. Most of these incidents occur through either carelessness or ignorance. Though the stingray is basically very wary and skittish, it will attack if it is stepped on or cornered. The resulting injuries can range from minor stings to severe lacerations, paralysis, or even amputation.
The best way to avoid being hit by a ray is to slide your feet across the bay floor. By sliding your feet, if you do happen to bump into a ray, it is most likely going to either beeline out of the way or circle back behind you and re-bed itself. While the ray’s first and most common reaction to your presence is getting out of the way, that circling tendency can be a real problem if the wader should take a sudden step backwards.
Understanding rays and ray behavior can be helpful to those hoping to avoid contact. First of all, it pays to know that the stingray is a cartilaginous bottom feeding fish and seeks to hide from predators by partially burying itself in soft mud or sand. The Atlantic Stingray, which is the most common in our bay systems, has natural camouflage. It is brownish on top with lighter shades on the edges or wingtips and white underneath. Atlantic stingrays spend most of their lives on muddy or sandy bottoms. Rays prefer to feed on crabs, shellfish, shrimp, worms, and assorted small baitfish. Though the stingray can tolerate fresh water, they much prefer the warmer, higher salinity waters or our bays and estuaries. Like many other fish, rays also migrate to deeper water during winter months.
The stingray’s major defense system, after natural camouflage, is the poisonous spine on its tail that has been documented to be as great as 15 inches in length. This spine is very sharp and pointed on the tip. The sides of the spine are retro-serrated and capable of causing severe tissue damage if driven into the flesh of a victim.
When the stingray’s barb is forced into a victim, a poison that is contained within the barb’s sheath is released. This poison can produce a drastic decrease in blood pressure. Ray victims usually also exhibit rapid pulse, dizziness and sometimes even go into shock. When the stingray strikes, it usually embeds its barb into the flesh of the victim. Next, it tries to flee. In fleeing, the ray either retracts its barb or if its stuck deeply, breaks it off inside the wound. When this happens, doctors must perform surgery, probing the injury to make sure all particles have been removed. Otherwise, the injury will not heal properly and could result in the development of gangrene.
Here’s a list of tips for wade fisherman who wish to avoid injury and a costly trip to the emergency room:
Now, let’s talk about some First-Aid procedures for stingray injuries if you are not so lucky.
FIRST, SEEK MEDICAL ATTENTION AS SOON AS POSSIBLE: Failure to have the wound treated by a medical professional could prove disastrous.
SOAK THE WOUND IN WARM WATER: (Hot as you can stand) Saltwater is OK if fresh water is not available. Outboard exhaust is a good source of warm water until you reach the dock.
DO NOT APPLY ICE: Both warm water and ice will ease the pain but ice causes complications that can make the wound more difficult to treat.
HANDLE THE WOUNDED AREA WITH THE GREATEST OF CARE: Wash the injured area with soap and water. Pour lots of fresh water over it. If the barb is tightly embedded, leave it alone! If pieces of barb or sheath are visible and easily extracted, do so carefully. Do not induce bleeding.
DO NOT COVER THE WOUND UNLESS NEEDED TO STOP HEAVY BLEEDING: Keeping the wound immersed in warm water is better than just about any other First-Aid procedure after the wound has been cleansed and bleeding has been stopped.
Though I have waded many miles, I have been very lucky and have never been hit by a ray. I have, however, had my share of close calls and near misses. Hopefully the information I’ve provided here can help other anglers be as lucky. I’m told that the pain suffered following a hit is horribly excruciating and some victims are actually off their feet for weeks.